Over the last five years, the world has seen a revolution in R&D towards the implementation of Connected and Autonomous Vehicles (CAVs). CAVs might be defined as vehicles without a human driver in the control loop, that may receive and transmit messages to other vehicles or roadside traffic management, allowing for better and more timely decisions. With such information and with direct control over the vehicles, it is hoped that significant strides can be made in the reduction of accidents and the increase of capacity.

The theoretical benefits are well known: the total elimination of accidents, and a potential 900% increase in capacity by using platooning systems. However, the practical benefits when interaction with non-CAV traffic is taken into consideration are likely to be far fewer. In order to accurately undertake meaningful cost-benefit assessments, simulation has become invaluable.

While the simulation of CAVs has been possible for many years, it has typically been undertaken through making a range of simple approximations and changes to pre-existing behaviour. These typically involve specifying a vehicle type and then associating it with certain new behaviours and parameters, such as shorter desired headways or faster reaction times, to mimic the removal of the human driver from the control loop.

Within HumanDrive however we are modelling autonomous vehicles using a more detailed approach. While the motion of such vehicles and how and when they accelerate or decelerate, and by how much, is a closely guarded trade secret of OEMs (Original Equipment Manufacturers) around the world, a number of useful base equations exist which give us a valid starting point. For example, earlier investigations, such as that by Milanes and Shladover (2014), investigated controlling a vehicle’s motion using the following equation:

Where, ukprev is the speed of the subject vehicle in the previous time step, and the gains kp and kd trying to adjust the time-gap error (ek) with respect to the preceding vehicle.

While the implementation of such systems in simulation is comparatively straightforward, there are a wide range of factors that will demonstrably affect these vehicles’ impact on the traffic system. For example, it is well known that these controllers are designed to eliminate overreaction of human drivers, making them ‘string stable’ and damping or even eliminating shockwaves. However, it is clear that this is a function of the number of vehicles and a critical density must be reached before these effects can be observed. Such effects however will be reduced by a range of disruptive factors, most particularly how the vehicles would react should a vehicle pull in ahead of them, when they will decelerate and attempt to regain their target safety distance. These events will offset the stabilising effects of the controllers, but the shorter the following distance, the fewer they will be in number and the greater in effect (requiring more deceleration).

It should also not be overlooked that there is the potential that while benefits may accrue to those in autonomous vehicles, active disadvantages may accrue to other drivers and that this may have complex knock-on effects on lane-to-lane distribution and merge/diverge where gap availability is critical.

Within the HumanDrive project, we are intending to examine purely autonomous vehicles operating at high target speeds (60-70 mph) on the Strategic Road Network (SRN – Motorways and Dual Carriageways). In order to capture the wide variety of effects likely to occur, the project will examine two scenarios, one on the M1 Motorway near Sheffield, and the other, a more complex dual carriageway (the A19) in the North East of the UK, where the presence of junctions and roundabouts may cause disruption in any traffic smoothing, thus reducing benefits further.

We look forward to bringing you highlights of our findings in 2019. But for now, below is a video of some of the work we’ve been doing with Highways England around the A19.

The HumanDrive project is an Innovate UK-funded and CCAV-supported R&D project led by Nissan and supported by world-class experts from 9 other industry and academic organisations: Hitachi, Horiba MIRA, Aimsun, Atkins, The University of Leeds, Cranfield University, Highways England, SBD Automotive Ltd. and the Transport Systems Catapult. The HumanDrive team is developing an advanced vehicle control system, designed to allow the vehicle to emulate a ‘natural’ human driving style using machine learning and developing an artificial intelligence to enhance user comfort, safety and experience. 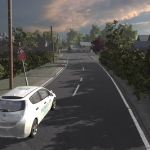